Bombs on The Hague

Seeing the title of this blog article, many people in The Hague would think I was referring to the bombing of the Bezuidenhout area in March 1945. But they would be wrong. During World War II, the Allies dropped bombs on more than one location in The Hague in their efforts to fight the evils of the Nazi occupier.

Beginning in April 1941 the Germans required every Dutch citizen to carry an identity card. This greatly complicated the lives of people in hiding and members of the resistance. To obtain an identity card, a person had to sign a receipt that also carried his or her photo and fingerprints. These receipts were then filed at a central archive. If the Germans suspected your identity card to be falsified, they could easily determine the truth by checking the archive. Of course you didn’t sign an official receipt when someone provided you with a false identity card! 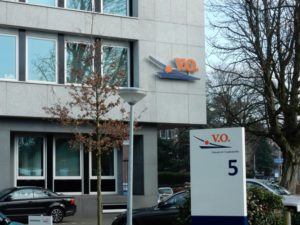 The Germans set up the archive in a large villa, which before the war had been the home of the Art Gallery Kleykamp. The villa was located opposite the Peace Palace, on a site where today you will find a modern office building.
The Dutch Resistance wanted very much to demolish this archive. But this couldn’t be done by people on the ground. Setting the building on fire was not an option. Not only was the building heavily guarded, but all the paperwork was stored in heavy steel cabinets that would likely survive a building fire.

Request for a bombing

Dutch resistance fighters therefore asked the Allies to bomb the Kleykamp building. This had to be done during a weekday and during working hours. Only then would the doors of the steel cabinets be open. And card index boxes would be standing unprotected on the desks. The bombardment would not be easy. The building was near a residential area and very close to the Peace Palace.
The pilots were extensively briefed. They were prepared with detailed maps and a plaster model of the Kleykamp building.

Tuesday April 11 1944 was the day. Six aeroplanes entered Dutch territory, flying very low to stay under the German radar. They used an indirect course towards The Hague to maintain the element of surprise. The Peace Palace turned out to be a clear beacon to navigate on.

The first aeroplanes dropped 500-pound bombs with delayed ignition through the roof, doors and windows, to break the building open. The other aeroplanes followed with fire bombs, each containing 72 litres of liquid phosphor. The result was a fire that was difficult to put out and clouds of thick smoke that rose from the ruins for two hours.

Five of the six aeroplanes accomplished their mission. The pilot of the 6th plane, however, was unable to release the bombs he carried — they were somehow stuck in their compartment. Three times he tried to drop his bombs, with no result. Exceedingly frustrated, the pilot took some photos and returned to England. As it happened, this pilot, Robbie Cohen, was Dutch. Unfortunately he didn’t live long to share this experience. In August 1944 he was killed while flying on a mission over France.

Obviously, such a bombing was expected to result in casualties. At the time, the Dutch Resistance and Allied planners had believed the archive staff to consist of members of the NSB (the Dutch National Socialist Party) and collaborators. Unfortunately, it turned out that only 5 out of 190 members of staff were NSB-members. In the end, counting both archive staff and people living in or passing through the area, 64 people were killed, 23 were badly wounded, and 43 had lesser wounds. These numbers might have been lower, had the Germans not focused their rescue efforts on saving documents, rather than helping personnel trapped in the building.

High Command in England regarded the mission as highly successful: ‘One of the most brilliant low-level precision attacks of the war’. All six planes returned safely to their base and the crews were awarded medals.
But in The Netherlands questions were raised: ‘Was this a just action, knowing that innocent lives would be lost?’, ‘Why not on a day or time when fewer members of staff would have been present?’

Although the Kleykamp building was completely demolished, much of the archive survived. However, because the identity card receipts were filed geographically, a number of municipalities essentially vanished from the records as a result of the bombing. This enabled the Dutch Resistance and others needing forged documents to register their ‘new’ identity cards in a municipality for which the Germans no longer had original receipts.

The Hague was deeply affected by the Second World War. I will tell you more about this on my walk ‘The Hague in World War II’. Or during the bycicle tour with the same theme.

11 thoughts on “Bombs on The Hague”