Esperanto in The Hague

Each year in the weeks before Christmas, my choir performs in nursing homes. This year we sang in a home called “Het Zamen”.

When I looked for directions I understood the peculiar spelling (“zamen” instead of “samen”).
The nursing home’s address is “Esperantostraat” and this street intersects with “Zamenhofstraat”.

To understand each other

If we can comprehend what someone says, we can understand each other and perhaps avoid conflicts. With this thought in mind, L.L. Zamenhof decided to create a new, simple language. Zamenhof (1859-1917) was born in Bialystok, in the North East of Poland. In his youth this town was inhabited by Poles, Russians, Jews and Germans. Because they all spoke their own languages, they often fell out and sometimes fought in the streets. Even as a young boy Zamenhof wanted to find a solution to this problem. He came up with the idea that there should be a common language that everyone could speak, in addition to their own languages. The result of his subsequent efforts – a new language known as Esperanto – was published in 1887.
This was rather special, since Zamenhof wasn’t a linguist. He studied medicine and became an ophthalmologist.

Having only 16 basic rules, one can learn Esperanto in a short time and communicate with others. In learning a foreign language, most of your time is taken by learning all the exceptions. In my secondary school days, I spent a lot of blood, sweat and tears on French irregular verbs. In contrast, the grammar and structure of Esperanto are very regular and logical.
In the language Zamenhof created, the word “esperanto” means “one who hopes” Esperanto is thus more than a language. Its speakers share the ideal of better understanding to create a better world. 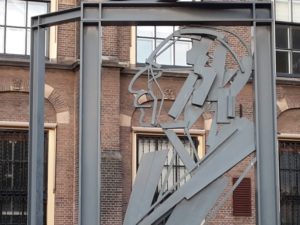 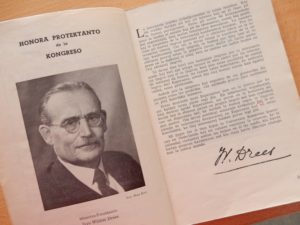 Willem Drees, a member of the council and alderman in The Hague and later prime minister of The Netherlands, was totally committed to the idea behind Esperanto. In 1933 he took a course from András Cseh. Drees praised the ‘ingenious simple structure of the language’. In a short time he acquired the ability to read Esperanto. Lack of time prevented him from reaching the next level. But whenever possible, he showed himself as a supporter of the language and the movement. By example by giving the opening statement at Esperanto conventions.

The Universal Esperanto Association has members in 120 countries, so if you learn Esperanto you can get in contact with people all over the world. In this digital age it is easy to learn Esperanto, for example through the website Duolingo.

The International Esperanto Institute has its office in The Hague. The organization has named its building after the above mentioned András Cseh. This institute organizes courses, develops course materials and maintains a library.
It’s fitting this institute resides in The Hague, City of Peace and Justice!

You can read this article in Esperanto

PrevPrevious postBerlage, insurance company designer in The Hague
Next postWomen get the right to vote in The HagueNext