Inproc | Tea and coffee in The Hague 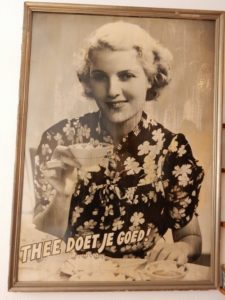 I drink tea and don’t like coffee, my husband drinks coffee and doesn’t like tea. But talking about beverages, we are of the same opinion on one thing: The best and most interesting coffee and tea shop in The Hague is Inproc at Denneweg.

As early as 1853 the Leupen family had a shop on the Denneweg, where they sold various products imported from the Dutch East Indies, then a colony of the Netherlands. The shop was named “Indische PROducten Centrale”. 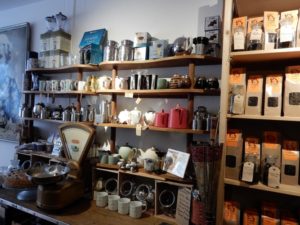 In 1937 Max Bartfeld took over the company. He and his family had fled Germany that year because as Jews they felt no longer safe in that country. After May, 1940, however, The Hague, too, was no longer a safe place. Fortunately, the Bardfelds managed to survive the war by going into hiding.
Another shopkeeper by the name of Liesker did a very good job as caretaker of the shop. Because of his good work, the Bartfeld family could run Inproc again after the war. They did so until 1967 when they sold the business to the Buys family. 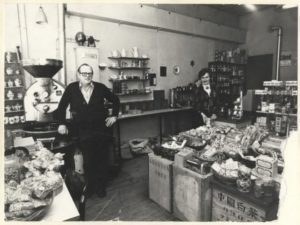 Piet and Corrie Buys didn’t have much experience as shopkeepers, but they decided to go for quality and attention to detail. They roasted and ground the coffee and blended the teas. They developed the store brand ‘Melati’, which is still in use. The Melati tea is one of my favorite teas! They also decided to specialise in coffee and tea, which meant that they stopped selling products like kroepoek (prawn crackers) and tempeh (a soy product).
In 1993 Piet died and Corrie carried one with the help of trusted employees. She sold the business in 2005 to the firm of de Wijs and Sons. This firm moved the shop to Denneweg 134 and the coffee roasting to Nieuwerbrug. Unfortunately Corrie died when she was still quite young.

Saved by a statue 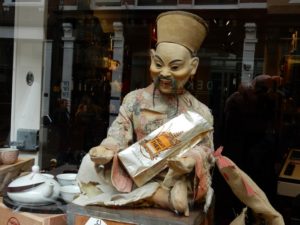 By the end of 2015 de Wijs and Sons wanted to close the shop. But Inproc was saved by a Chinese statue, prominently displayed in the shop window, which still belonged to the Buys family. A representative of the firm contacted Piet and Corrie’s daughter, Krista Buys: could she please collect the statue, since the shop was in the process of closing. Krista didn’t want this to happen — so she decided to buy the shop back. She followed in her parents’ footsteps with pride and enthusiasm. Even as a small child she had helped out in her parents’ shop, so she knew what to do as shopkeeper.

Go and take a look

Nowadays Inproc can be found at Denneweg 63. Here Krista can roast coffee as before and she makes tea blends from old recipes. Even now, she has customers from her parents’ time who continue to buy tea and coffee from the shop. 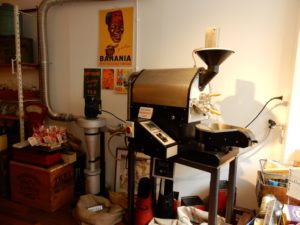 I am so very glad that she decided to preserve this icon of The Hague for all of us to enjoy!

Do you like a good cup of coffee or tea? Go to Inproc!