Pay toll to go to the sea

To reach the beaches of the Côte d’Azur we travel through France along “les routes a peages”. Or in English: toll roads. If we go to the beach at Scheveningen, we don’t expect to get our wallets out. Yet for more than 200 years this was exactly what the people of The Hague had to do.

Until the second half of the 17th century the only way to go between The Hague and Scheveningen was by means of a sandy path. So imagine the gruelling journey the Scheveningen fisherwomen had to make to take their fish to the market. They had to carry heavy baskets and walk through the sand.

Plan for a road 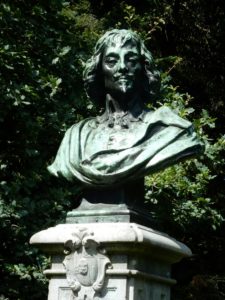 Constantijn Huygens, secretary to stadholder Frederik Hendrik and his son Willem II, came up with a plan to build a paved road to Scheveningen.
In 1653 he wrote a policy document and presented this to the authorities of The Hague. As one of the advantages of such a road he mentioned that it would make it easier for Hagenaars to enjoy the fresh sea air. And he stressed that the “poor slaves from Scheveningen” would have a much easier journey walking the paved road with their baskets full of fish. He also suggested that less time on the road would do wonders for the freshness of the fish. Gourmets in The Hague would taste the difference between “sandfish” and “stonefish”. 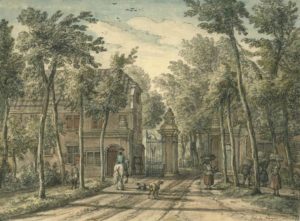 Despite these arguments, city authorities only saw the light when Huygens presented his plan a second time — ten years later. On December 5, 1665 the Sea road from The Hague to Scheveningen – nowadays Scheveningseweg – was opened. 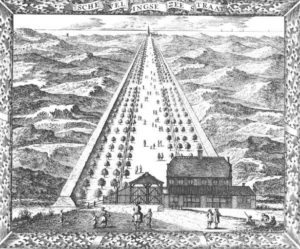 Knowing that four million bricks were used to construct this road, you will understand that the costs were very high. It was decided to charge a toll, from which the fisherwomen were exempt. Other road users had to pay, whether they travelled by coach or on foot. Pedestrians couldn’t escape the toll, because the road was lined with two-meter-high berms.
To collect the toll, the city erected a tollgate, along with an adjacent tollhouse. This tollhouse is still on its original site, although smaller. A portion of the tollhouse was removed in 1864 when the horse-drawn tram line was constructed. Another section of the building was taken away when the electric tram became double tracked. In 1924 the tollgate was relocated to Kerkhoflaan. 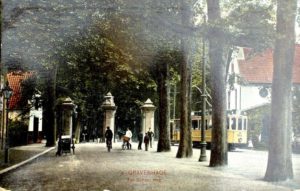 In 1880, the city collected 20.000 guilders in tolls. But as a result of urban expansion in the 19th century other roads to Scheveningen had been constructed, allowing traffic to avoid the Scheveningseweg toll. So in 1888 it was discontinued.

On a modern map of The Hague, you can see two roads that run parallel to Scheveningseweg on the south: “Tolweg – Toll road” and “Verlengde Tolweg – Extended Toll road”. These roads were constructed in 1913 and 1917 respectively, more than 20 years after the toll was discontinued. They were planned to provide extra capacity for future heavy traffic on Scheveningseweg. But as you can see on the map, the two segments are not connected. The connection part that was to have run across the Sorghvliet estate was never built. 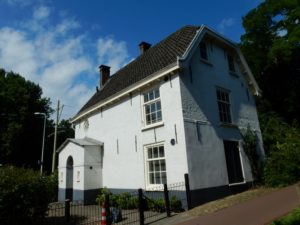 The tollhouse and tollgate are amongst the points of interest you can visit during the bicycle tour “From city to the sea”. More info

Local elections in The Hague