Women get the right to vote in The Hague

The first time I could take part in a national election was in 1977. But, although I could cast my first vote in 1977, I could not have stood as a candidate for anything! Back then you had to be 21 to stand as a candidate. And in 1977 I had not yet reached that age. 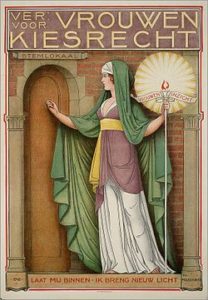 Over a hundred years ago in 1917 the rewriting of the Dutch Constitution enabled women to stand as candidates for public office, and that is exactly what happened during the 1918 national elections. Suze Groeneweg became the first female member of parliament. She was a member of the Social Democratic Labour Party. A member of the Second Chamber, she supported paid labour for women and protested against the dismissal of female civil servants just because they got married.
Oddly enough, Groeneweg was elected without votes from any women. It would be two years before Dutch women were given the right to vote. With amendment of the electoral law in 1919, both men and women 25 years of age or older were able to vote for candidates for public office.

Fighting for the Right to Vote 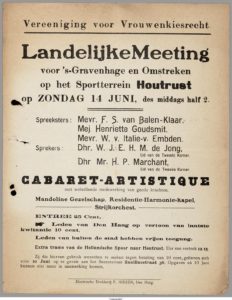 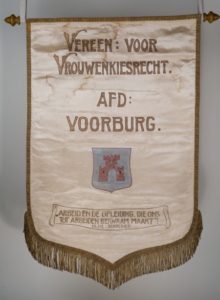 It took some struggle to realize women’s suffrage in The Netherlands. And since The Hague is the nation’s seat of government, much of this struggle took place in this city.

An important contribution was made by the ‘Association for Women’s Suffrage’ (Vereeniging voor Vrouwenkiesrecht), founded in 1894. Aletta Jacobs became its national chairwoman in 1896. Aletta was the first woman to formally attend a Dutch university and the first female physician in the Netherlands.
The goal of this association was, of course, to obtain voting rights for women. Its members wrote letters to members of parliament, put up posters and published a magazine. Twice, representatives of the association were granted an audition with Queen Wilhelmina. 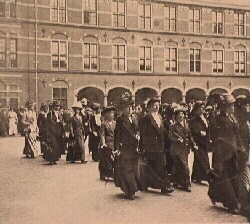 More noise was made during a rally at the Binnenhof in 1913. Because the mayor of The Hague refused to allow a large gathering, the women came to protest in groups of 25, one after the other.

Women in the council of The Hague

September 2, 1919 saw the first female members in the council of The Hague. Eight stood as candidates and two were elected. They were Geerdina Wilhelmina Bleumink-Louman, number 10 on the list of the Social Democratic Labour Party (photo), and Johanna Wolda – van der Puil, number three on the list of the Communist Party Holland.

If you want to know more about interesting women who lived and worked in The Hague, Let me organize the guided tour ‘The Hague’s Top Women’ for you, your family, friends or colleagues.